Today i went exploring Distant Lands and did walk to the world border. I began my way back home when i found this cave. i was wondering where it did lead to so i jumped down and found a river. I followed it all the way down(not very far i must say). at the bottom I found this shaft. it looked like the roof had crumbled. -well time to mine, i did think. i found many iron ores and coal ores. Then suddenly i did here running footsteps, and i know it could not be any other player so i started walking around looking for anything weird. I thought i was going mad. when i heard mining. I did tp as fast home as i could after writing down my coordinates. 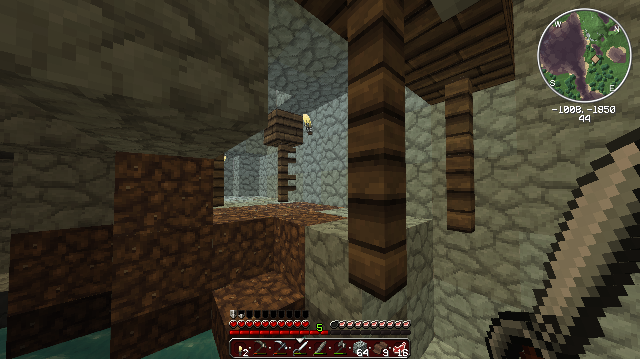 That seems a bit odd. Umm can I ask you what texture pack you use?

Yes of course you can. I use Dokucraft custom made.

i went back to this spot and waited for a while. i didnt hear anything but running water. ill return later with more people to investigate.

It must be the new lava sound, thought exactly the same first time i ^^

A have found a short plausible solution for my hearing the running noise even it is just plausible. My minecraft sound did mess up, but that do not explain the mining sound when i did not mine.

me, demonicpuppy, ethereal_panda, and plasmadevilha went to here and set up a base to investigate. this is what weve found so far, written by demonicpuppy:

day 1: no unusual sightings. quite cold... there seems to be rather odd noises coming from within the cave structures.
day 2: we have come across a creepy cave. it seems to be dug by man but there is no sign of human activity in this cave.
day 3: lord treijim was pushed around the room by what seemed to be nothing. perhaps the lords sanity is wearing thin. a creeper came through a wall. we are all now wary of the area.
day 4: a spider faded up through the floor beneath us. oddly enough it seemed to be passive. after a few seconds the spider vanished.
day 5: our food source is low, i think lord panda has been stealing food from the chests. im keeping my eye on lord panda.
day 6: lord treijim saw a figure outside by the water. its getting colder in the cave. my feet are smelleh cos i put on pandas boots.
day 7: plasma is seeing people in the walls. i think he is going insane. theres been creepers coming from thin air.
day 8: plasma and trei found some ravines. plasma had seen treijims name through a wall and also plasma had seen an unknown figure in a cave near a lava source.

thats all so far. its getting quite creepy down there, so its hard to go back